Who Keeps Moving the Airport? And Other Questions (Whines)

Who keeps moving the airport?

I was not born with a sense of direction. If you left me alone in the Pine Barrens and told me to ‘find north', you would never see me again. I might have a fighting chance if you told me, "Left at this tree and right at that one." I'm also pretty good at up, down, forward and backward. Okay, I’m actually great at backward. But tell me to head due east or northwest and you can color me clueless.

Airports are particularly challenging for me. I can't drive toward an airport without breaching the Bermuda Triangle. My sister used to ask me how close I had to get before my gauges started flipping. Doesn't matter which city, which airport or how many times I've been there, I always get lost. I either miss the exit, turn off before the exit, or drive in the opposite direction.

And in case any Floridians are wondering, the answer is yes. I have gotten lost on my way to Daytona International Airport (DAB). I kid you not. For those of you who don't know how embarrassing that is, the airport is on the main road through town and across the street from the mall (which I can find blindfolded during a hurricane). DAB is small. It's a no muss, no fuss airport and therefore my favorite. And by favorite, I mean; I don't dread it as much as big airports. They are impossible for me. Which leads me to my next question.

Where is the terminal?

For me, finding the correct terminal is about as easy as finding a needle on a tarmac. When I lived in New Jersey, Newark Liberty International was a recurring nightmare of mine that always began with the same puzzle. Which lane would get me to my terminal? If I was lucky enough to untangle that enigma, I couldn't get into the lane. Ever had one of those dreams where you want to move, but you can't? Then you have an idea of what it's like to drive on a New Jersey highway. Changing lanes is risky. The average flow of traffic is a bumper to bumper 90 mph drag race in which lane-changers are synonymous with interlopers. I guess I was never aggressive enough to keep up. Also, I didn't want to die, so I'd end up doing loops around the airport like Clark Griswold did around the Lambeth Bridge roundabout in London. And like Clark, I muttered to myself hysterically about how I could not get left.

Once, in a bold move, I took advantage of a narrow opening between two Fed Ex trucks, squeezed into their lane and floored it. I was still pumping my fist in the air and yelling, "Woo Hoo," when I realized that I had driven into the RESTRICTED cargo area. Thankfully, this was pre-911, so I was not surrounded, handcuffed, arrested and interrogated or shot on sight.

Newark airport was also the bane of my visiting family's existence. It was always a crap shoot as to whether I was going to get them to the airport on time to make their return flight. Once, when I was rushing my anxious mom to the airport, I missed the terminal exit, left the airport and drove us straight into downtown Newark. Poor Mom. She'd picked a bad day to quit smoking, sniffing glue and biting her nails.

Of course, I am joking. Mom has never been a nail-biter.

Which is worse? Loading/Unloading or Parking?

Every airport seems to have a menacing police presence at the Arrival and Departure drop-offs and in Newark, it's the job of the Port Authority Police to keep things moving. You risk a face to face with Officer-Move-It every time you park long enough to safely load and unload your passengers. And by long enough, I mean; come to a full stop.

A few years ago, I attempted to pick up my visiting sister at the arrival area at Newark Liberty. I knew from our cell phone conversation that she had just retrieved her bags and would be out momentarily, but Officer-Move-It was not having it. He strode up to my car and ordered me to leave. When I tried to explain that I would only be another minute, he threatened to give me a ticket. Sheesh! My poor sister walked out of the airport in time to see me drive away. Unfortunately, I made a wrong turn (Bermuda Triangle) and exited the airport. It took me thirty minutes to find my way back to the Arrival area.

Each time I took my mother to the airport, I knew a meeting with Newark's finest was inevitable. Mom dances to only one tempo. Doesn't matter if she's late or on fire; her internal metronome is stuck on slow. I often wondered if Officer-Move-It would rather I just decelerate, toss her luggage out the window and shove her out of the car while instructing her to tuck and roll.

This is why parking at the airport is sometimes unavoidable. The larger airports have open air garages with endless levels, sections and rows. I always consider it a good omen when I can find a parking space less than a mile from the terminal entrance. The hard part is remembering that I parked in Terminal B, Level 17, in the Green Section in Row 125. And it ain't cheap.

What happened to the Hare Krishna? 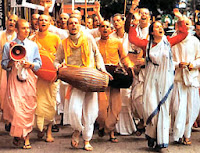 I miss the good old days when the most annoying people at the airport were the Hare Krishna. I read that the Supreme Court banned them from soliciting at several international airports, which I find both ridiculous and surprising. Ridiculous, because they were harmless, and surprising because I would have bet money that the TSA rounded them up and tossed them. Which begs the question.

Why is the TSA so mean and scary?
Any encounter with the TSA is enough to remind me that these are no longer friendly skies. I don't like going through security. The agents scare me. I'm always afraid that I'm one misstep away from the wrong end of a proctology exam.

This summer, I put my sixteen-year-old-daughter, on an early morning flight out of Orlando International. This was her first solo flight that included a layover. She was nervous about the prospect of getting off one plane and finding the gate for another, so I thought if accompanied her to the gate, I could alleviate some of her stress. And once the airline determined that I was not a member of Al Qaeda, they issued me a special pass. 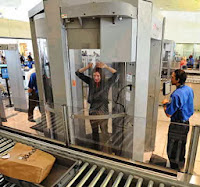 When the TSA personnel told us to take our shoes off, we both understood that this this was not a Beverly-Hillbillies-esque-invitation. After all, we were Jersey girls. Also, we could see that our next stop was a body-scan which is pretty much the opposite of setting a spell.

Like dozens of other airports, Orlando has done away with the handheld wand and has upgraded to the monstrosity that is the full body scanner. The directive is to step inside the machine, stand on the footprints and reach for the sky. My daughter was ahead of me in the line and nearly came undone when the TSA started barking instructions at her and I couldn't blame her. The machine and the procedure are intimidating for even the toughest Jersey gals. When she neglected to put her hands over her head, the agent looked at her thoughtfully for a second, took a step toward her and asked “Do you speak English?” I am not proud of what happened next. And I can't explain why it happened. While my red-faced daughter nodded yes, I laughed out loud. And I couldn't stop. The TSA agent and my daughter glared at me as I stumbled into the scanner doubled over with tears streaming down my face. I can't swear to it, but I may have snorted. I laughed while I was inside the scanner, feet spread and arms raised. I laughed while I put my shoes back on. I laughed while my daughter,who found no solace in the fact that I didn't pee my pants, scolded me. "It's not funny Mama!" I was still laughing when my mortified daughter and I arrived at her gate.

The good news was that I had unwittingly accomplished my goal and cured her lay-over fear. My daughter couldn't wait to get on the plane and get as far away from me as possible. Still, she was sweet enough to hug her embarrassing mother before she boarded her flight. When I knew that her flight was in the air, I went to find my car on Level 12 in the Red Section in Row 21. Or was it Level 21, Row 12? Crap. My gauges had already begun to flip.

The end of the whine
Okay, I'm done. Sure, there are other things that annoy me about airports, but whining is an exhausting business. Anyone need a ride to the airport?
Posted by Audrey Knerler at Wednesday, October 16, 2013 6 comments: